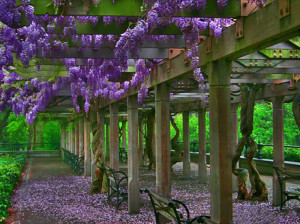 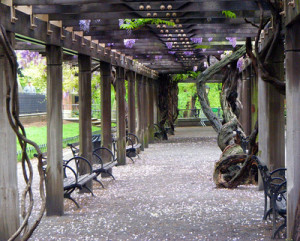 That time of year thou mayst in me behold
When yellow leaves, or none, or few, do hang
Upon those boughs which shake against the cold,
Bare ruined choirs, where late the sweet birds sang.
In me thou see’st the twilight of such day
As after sunset fadeth in the west;
Which by and by black night doth take away,
Death’s second self, that seals up all in rest.
In me thou see’st the glowing of such fire,
That on the ashes of his youth doth lie,
As the death-bed, whereon it must expire,
Consumed with that which it was nourish’d by.
This thou perceiv’st, which makes thy love more strong,
To love that well, which thou must leave ere long.

Analysis
Sonnet 73 paints a picture of the poet on the brink of death, and thanks the beloved for being accepting.

William imagines that looking at him must resemble an image of autumn, when leaves are crunchy and skeletal, or when bare branches shiver in anticipation of the winter. He is the twilight, which is when night falls and, like death, closes up everyone in rest. The almost-death of glowing coals atop the ashes, killing what kept it alive. But the young man sees all these things but the young man loves him anyway, though he will not be around long.

Will’s Wordplay
Shakespeare’s use of a consistent metaphor at the end of each quatrain shows both the author’s acknowledgement of his own mortality and a cynical view on aging. By dropping from a year, to a day, to the brief duration of a fire, Shakespeare is establishing empathy through the lapse in time. Despite negatively depicting the problem of aging in the first three quatrains, each symbol is needed to set up the purpose defined by the last couplet of the sonnet. In these lines, our speaker acknowledges the growth in his love for his significant other. This growth directly correlated to his lover’s unrelenting adoration in spite of the physical deterioration caused by aging.LOCATION

“The Conservatory Garden is divided into three smaller gardens, each with a distinct style: Italian, French and English. The Garden’s main entrance is through the Vanderbilt Gate, on Fifth Avenue between 104th and 105th Streets. This magnificent iron gate, made in Paris in 1894, originally stood before the Vanderbilt mansion at Fifth Avenue and 58th Street.

Wide stairs lead down to the Italianate Center Garden. The large lawn is surrounded by yew hedges and is bordered by two exquisite allées of spring-blooming pink and white crabapple trees. A 12-foot high jet fountain plays on the western end of the lawn, backed by tiered hedges and stairs that lead up to a pergola covered in wisteria. On the walkway under the pergola are medallions inscribed with the names of the original 13 states.” [1]

Sonnet Project
The Wisteria Pergola was the featured location for Sonnet 64 performed by Pat Dwyer, directed by Malinda Sorci. The video was released on May 26, 2014.

ACTOR – Pat Dwyer
Pat Dwyer* last appeared with The New York Shakespeare Exchange playing Montague and the roles of The Headmaster, Dr/s. Dred & Drake, Mr. Steifel in their reading of Romeo & Juliet paired with Spring’s Awakening. Pat first worked with The Exchange appearing for them in the “What’s So Funny” staged readings of Much Ado About Nothing and Island and has taken part in one of their Summer ShakesBEER pub crawls. Other highlights: Sheila Head’s The Egg Game, The Shakespeare Forum’s inaugural production of Hamlet and, most recently in the Austin Pendleton helmed production of Look Homeward Angel

In 2010 Pat appeared as Matthew in a production of 100 Saints You Should Know. This marked his return to the stage as his profession after an absence of more than 16 years. During that time away Pat had a career in advertising for which he offers to the public his sincerest apologies. His reason for leaving the stage are many and totally unjustified now by virtue of the time he wasted in the world of internet advertising. Fortunately he kept his union card that allowed him access to the Equity building on 46th Street, justifying the yearly dues by saying “At least I always have a clean place in Times Square where I can go pee.”

CINEMATOGRAPHER – Yevgeniy K’banchik
Yevgeniy K’banchik is an award-wining cinematographer and filmmaker. A graduate of the Moscow School for Filmmaking and Screenwriting, Yevgeniy has worked in Telesto film company in Moscow (Russia) directing films for TV, as well as a freelance special effects artist and cinematographer. In 2004 his first short Stalker-Blues, received a special recognition at Ashland Literary film festival. In 2005 his documentary Master was a nominee for Golden Lion at Swaziland Film festival in Africa. In 2010 His film Pechatnikoff Alley #3, won the Prodigy Auteure Prize in Amsterdam and a prize at the Indie Film Fest USA. In 2009, Yevgeniy created Zoige Production Company, and has been producing short films and instructional videos as a director and cinematographer.