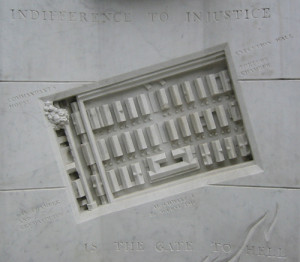 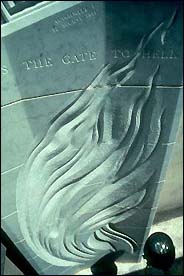 No longer mourn for me when I am dead
Than you shall hear the surly sullen bell
Give warning to the world that I am fled
From this vile world with vilest worms to dwell:
Nay, if you read this line, remember not
The hand that writ it, for I love you so,
That I in your sweet thoughts would be forgot,
If thinking on me then should make you woe.
O! if, I say, you look upon this verse,
When I perhaps compounded am with clay,
Do not so much as my poor name rehearse;
But let your love even with my life decay;
Lest the wise world should look into your moan,
And mock you with me after I am gone.

Analysis
Sonnet 71 requests that the beloved not mourn the poet’s death if it would bring sadness or shame to him.

Willy bids the young man not to mourn long when the poet dies. He may cry until the deathknell of the church bell and no longer. He asks the youth not to remember the hand that wrote this poem, but would rather be forgotten than bring any sadness to him. Should the poem be read while Willy is in the ground, he doesn’t want the youth to mention his name, but wants their love to decay as he does, and so avoid mockery for loving one dead.

Will’s Wordplay
At funerals during the Renaissance, one could pay to have the “passing-bell” rung as many times as years the deceased was alive, as a tribute to his or her life.

The final line reveals that Shakespeare is worried about bringing shame by association on one who loves him. Oh Willy if you only knew…

Judge Francis T. Murphy, presiding justice of the New York State Court of Appeals, conceived of creating a Holocaust monument at the site. The artist, Harriet Feigenbaum, won the 1988 competition to design the memorial, with a proposal to feature a replica of an aerial photograph of Auschwitz taken by American planes as they bombed German oil factories nearby on August 25, 1944. The photos are significant because they demonstrate that U.S. planes had the ability to destroy the death camp. [1]

Harriet Feigenbaum attended both Columbia University and the National Academy School of Fine Arts in New York City. Throughout her career she has focused on sculptures and installations out-of-doors, both in rural and urban settings. Feigenbaum has developed many environmentally conscious works, spending a great deal of time in the coal mining regions of Pennsylvania. “Reclamation Art” was a project in which Feigenbaum attempted to repair the damage that strip-mining has done to the land. Her work is concerned with sociopolitical issues as well. She has said, “For me, a work of public art must enhance the environment in a provocative way. Art created for a particular situation cannot satisfy every special interest group, nor should it. The artist’s mission must prevail or the resulting project will not be an artwork.” [2]

The New York City Department of Cultural Affairs describes it as a six-sided half column rising 27 feet above its base. The five-sided concave base extends one story below ground level, the overall height of the Memorial being 38 feet. Carvings of flames along the length of the column recall the flames of the gas chambers at Auschwitz. They appear to blow in the direction of the courthouse as if to threaten the symbol of Justice. A relief of an aerial view of the main camp at Auschwitz is carved into the base at eye level…On the base under the relief is a giant flame extending below ground level as a final reminder of Crematorium 1 at Auschwitz.” The words “Indifference to Injustice is the Gate to Hell” are engraved around the image. The carving notes five of the specific points within the Auschwitz camp that were visible in the original photograph: Torture Chamber, Execution Wall, Gas Chamber and Crematorium 1, Commandant’s House.

Sonnet Project
The Holocaust Memorial was the featured location for Sonnet 71, performed by Kristi Dana, directed by Noemi Charlotte Thieves. The video was released on June 10, 2013.

ACTOR – Kristi Funk Dana
Kristi is a native of Hudson, NY and currently resides in Brooklyn with her husband. She is a recent graduate of the Brooklyn College, CUNY, MFA Acting Program. Brooklyn College credits: A Bright Room Called Day; In the Next Room or the vibrator play; Julius Caesar; New York Credits: Armor of Wills; ABC’s All My Children; Apprenticeships at The Actors Theatre of Louisville and The Berkshire Theatre Festival. Kristi also holds an MA in Theatre Education from Emerson College and a BA in Theatre Arts from Penn State. Kristi is the Producing Artistic Director of The Proprietors Theatre Company, based in Hudson, NY. The Proprietors focuses on classical theatre, the works of women playwrights and theatre education for the community’s youth. Kristi is also an active theatre educator, having taught acting at Brooklyn College, The School of Creative and Performing Arts, Acting Out! Brooklyn, Kentucky Classical Theatre Conservatory and the Boston Children’s Theatre. She is currently teaching voice and movement for the T. Schreiber Youth Conservatory and Introduction to Theatre for the STAR Early College Program at Brooklyn College. VASTA member. AEA & SAG-AFTRA. www.proprietorstheatre.org; www.kristifunkdana.com

DIRECTOR – Noemi Charlotte Thieves
Noemi is a filmmaker/photographer/illustrator/writer whose work tackles the value of contemporary mythos within modern storytelling. Using live theater, film, and trick editing, his work aspires to meld the advances made in literature, photography, sound and performance, using cinema to create a novel phenomenological experience. He garnered his BFA from The Cooper Union School Of Art, where his senior thesis Glengarry Glen Ross Live! received piece of the year. He was awarded the TAM memorial prize given to the best multimedia artist, as well as the Mielcarek prize for outstanding work in photography. He is currently working on a full-length graphic novel, a documentary about the history of education, and his first feature film, GHETTO.
View his Tumblr at NOEMI CHARLOTTE THIEVES