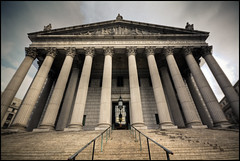 Mine eye and heart are at a mortal war,
How to divide the conquest of thy sight;
Mine eye my heart thy picture’s sight would bar,
My heart mine eye the freedom of that right.
My heart doth plead that thou in him dost lie,
A closet never pierced with crystal eyes,
But the defendant doth that plea deny,
And says in him thy fair appearance lies.
To ‘cide this title is impannelled
A quest of thoughts, all tenants to the heart;
And by their verdict is determined
The clear eye’s moiety, and the dear heart’s part:
As thus: mine eye’s due is thine outward part,
And my heart’s right, thine inward love of heart.

Sonnet 46 wrestles with the age-old question: which is it, outer beauty or inner?

Will’s heart wants one thing, emotional love, while his eye wants to drink in physical beauty. While the eye fixates on the physical appearance of his beloved, the heart would prefer not to see the physical at all, and instead focus on pure emotion. The young man resides inside Willy’s heart, unseen. The eyes disagree with the heart, arguing that they are capable of detecting of the beauty of a person. The jury’s final decision is to divide the lover– the eyes can have the physical beauty, the heart the inner beauty

The dichotomy of eyes and heart in love’s realm was traditional. The eye was believed to hold the image, but the heart was responsible for feeling and emotion.

To “impanel”, or empanel, is to set up a body of jurors.

The granite-faced hexagonal building was designed by Guy Lowell of Boston in classical Roman style and was built between 1913 and 1927, completion having been delayed by World War I. It replaced the former New York County Courthouse on Chambers Street, popularly known as the Tweed Courthouse. Both the interior and exterior are New York City Landmarks.

The building’s mass and scale give it the appearance of a temple. A broad set of steps sweeps up from Foley Square to a massive Corinthian colonnade covering most of the front of the courthouse, topped by an elaborate 140-foot-long triangular pediment of thirteen figures carved in bas relief from granite. The pediment and acroteria by Frederick Warren Allen include three statues: “Law”, “Truth” and “Equity”. A frieze bears the inscription “The True Administration of Justice is the Firmest Pillar of Good Government”, a 1789 quotation attributed to George Washington.

The rotunda contains the oft-reproduced and recently restored mural Law Through the Ages.[5] Attilio Pusterla painted a number of murals in the rotunda in the 1930s under sponsorship from the Federal Art Project of the Works Project Administration The mural is divided into six sections, each depicting a pair of figures from historical cultures important to the history of law: Assyrian and Egyptian, Hebraic and Persian, Greek and Roman, Byzantine and Frankish, English and early colonial, with the final section portraying George Washington and Abraham Lincoln. Above the seated figures are portraits of six lawgivers: Hammurabi, Moses, Solon, Justinian, Blackstone and John Marshall.

Along Foley Square, the Thurgood Marshall United States Courthouse sits next to the New York State Supreme Court Building. On the far right can be seen part of the Municipal Building on Park Row

Lorielle is the Director of Conservatory Training and a faculty member at the Atlantic Acting School, the sister institution of the Atlantic Theater Company. Credits include: SELF: BY ALISON CARSEN (writer/director/actor, Student Emmy, UCLA Directors Spotlight Award), THE WONDER PETS! (writer), I Never Saw Another Butterfly… (producer/director), Lovers (VTA Best Actress Award). Current projects: THIS AMERICAN DEATH (producer), WHAT IF, RIGHT NOW…? Based on the short story “Victory Lap” by George Saunders (producer/writer/director). In LA she worked for six years for Jodie Foster and her Paramount Pictures financed company, Egg Pictures (Meg LeFauve, president) on multiple features (including THE DANGEROUS LIVES OF ALTAR BOYS) and as story editor for projects Egg was developing. She also served as an assistant to Ms. Foster on FLIGHT PLAN and INSIDE MAN. BFA (NYU-Atlantic), MFA (UCLA), Ed.M. (Harvard), FIND Producing Lab Fellow, and 2012 NYLA – Bessie Lab participant.