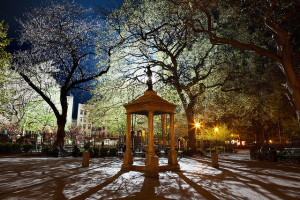 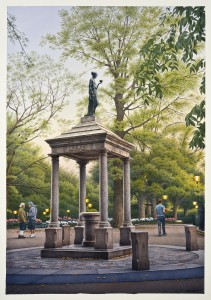 Those pretty wrongs that liberty commits,
When I am sometime absent from thy heart,
Thy beauty, and thy years full well befits,
For still temptation follows where thou art.
Gentle thou art, and therefore to be won,
Beauteous thou art, therefore to be assailed;
And when a woman woos, what woman’s son
Will sourly leave her till he have prevailed?
Ay me! but yet thou mightst my seat forbear,
And chide thy beauty and thy straying youth,
Who lead thee in their riot even there
Where thou art forced to break a twofold truth:
Hers by thy beauty tempting her to thee,
Thine by thy beauty being false to me.

Analysis
Sonnet 41 justifies a crime of unfaithfulness by blaming the subject’s beauty as the culprit, but the poet is reproachful, suggesting that the young man might still have shown a little respect.

Billy’s lover’s crime has been justified with a list of extenuating circumstances showing that the youth himself was hardly responsible for the deed. It was his rare youth and his beauty which were responsible, for they are always open to attack from preying women. Yet even so, Bill thinks the young man might have restrained himself, for it has caused both the young man and the mistress to break their vows to him – a two-fold crime which is doubly heinous.

Will’s Wordplay
It is interesting to see that this sonnet ends on a note of accusation, a comparatively rare event, for reconciliation or self effacement are the usual outcomes of those situations where fault has been found. Here the accusation of troth-breaking is more specific and hurtful, a potential cause of a permanent divorce of the loving relationship.

Temperance Fountain,Tompkins Square Park, Manhattan
A temperance fountain was a fountain that was set up, usually by a private benefactor, to encourage people not to drink beer by the provision of safe and free water. Beer was the main alternative to water, and generally safer. The temperance societies had no real alternative as tea and coffee were too expensive, so drinking fountains were very attractive.

Dating to 1888, this neo-classical fountain was the gift of the wealthy San Francisco dentist, businessman, and temperance crusader Henry D. Cogswell. The California Gold Rush of 1849 lured Cogswell to San Francisco. There his prosperous dental practice and real estate investments permitted him to retire in 1856 with a fortune estimated at $2,000,000. He engaged himself in public philanthropy, helping to advance the anti-alcohol or “temperance” movement.

Cogswell’s most lasting legacy was the 50 monuments he sponsored nationwide between 1878 and the 1890s. Most were versions of the temperance fountain. Several of the fountains, such as this in Tompkins Square Park, were covered by a stone canopy or baldachin supported by four Doric columns. The four stone entablatures are emblazoned with the words Faith, Hope, Charity, and Temperance.

The erection of the Temperance Fountain in Tompkins Square Park resulted from Cogswell’s affiliation with the Moderation Society, which was formed in 1877 to address health conditions on the Lower East Side, and to distribute free ice-water fountains to encourage citizens to drink water instead of alcoholic beverages. The figure of Hebe, the mythical water carrier, atop the pyramidal stone pediment was originally fabricated in zinc by the J. L. Mott Iron Works in Mott Haven in the Bronx.

Though the four ornamental luminaires with red, white and blue tinted glass, which once flanked the fountain, long ago vanished, this monument has withstood the vagaries of time better than most. In 1992, the fountain underwent extensive restoration, and the Hebe statue was replaced with a more durable bronze replica.

Sonnet Project
The Tompkins Square Park Temperance Fountain was the featured location for Sonnet 41, performed by Johnny Sparks, directed by Matthew Kohn. The video was released on June 5, 2013.

ACTOR-Johnny Sparks
Johnny owes about 3/4 of his resume to William Shakespeare. Starting over two decades ago he’s played Puck, Flute and Lysander in A Midsummer Night’s Dream, Claudius as well as the title role in Hamlet and Posthumous, Cloten and Iachimo in Cymbeline just to name a few. He has yet to tackle King Lear but when Ross hears the pitch for his site-specific, one man musical version set in Bushwick he’s confident it’ll be a lock. Training: SMU, Yale.

Kohn’s main work is The Manute Bol Sudan Reconciliation Film Project, a five-year epic documentary about a cutting edge group of Muslims and Christians working to build 41 schools and foster reconciliation between the war-torn nations of Sudan and South Sudan. The film features the first African NBA player, Manute Bol, and many people who worked with him and were inspired by him after his death.

Kohn’s first feature documentary is the acclaimed CALL IT DEMOCRACY (callitdemocracy.com), the only film about the history of the Electoral College in Presidential Elections. He followed with Site Specific: The Legacy of Regional Modernism, a commission by Metropolis magazine for their 25th Anniversary. The film explores an effort to save Riverside High, a late 1950s example of environmentally sound architecture designed by Paul Rudolph. He recently completed You Decide, a series of short PSAs about cancer awareness for the National Institute of Health and is an associate producer of Charlie Victor Romeo, premiering at Sundance 2013. Matt is on the board of difrent, an NGO with a clear mission: to be the world’s leading source for music and culture for social change, featuring artists and organizations who are making a better world.

Kohn’s short fiction films include Sea Level Inferno, SinCine winner Rosa X-Rays Joe and Freedom Isn’t Free featuring Alexandria Wailes, and I think I know You. Kohn’s next fiction project is the feature film version of his script, Jimmy Three. It’s the story of a Polish journalist in Greenpoint Brooklyn who is coping with the impending death of his terminally ill artist wife.

For more than two years, Matt hosted Speakeasy Cinema, a monthly screening salon which invited new and accomplished filmmakers to screen secret, provocative films. He graduated from Brandeis University with a degree in Politics, with studies in film and feminist theory. In addition to his personal films, Kohn has worked in the film industry as a line producer, producer, editor and most recently short film and documentary cinematographer.