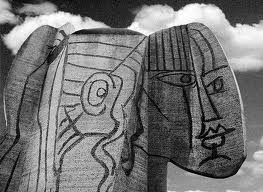 How can my muse want subject to invent,
While thou dost breathe, that pour’st into my verse
Thine own sweet argument, too excellent
For every vulgar paper to rehearse?
O! give thy self the thanks, if aught in me
Worthy perusal stand against thy sight;
For who’s so dumb that cannot write to thee,
When thou thy self dost give invention light?
Be thou the tenth Muse, ten times more in worth
Than those old nine which rhymers invocate;
And he that calls on thee, let him bring forth
Eternal numbers to outlive long date.
If my slight muse do please these curious days,
The pain be mine, but thine shall be the praise.

Analysis
Sonnet 38 again praises the fair young man for his inspiring beauty, an almost superhuman force, and suggests the young man take all the credit for the poetry written about him.

Bill asks how he can look for poetic inspiration elsewhere when there is such a grand example of it before him in the handsome young man? The problem is that he is almost too beautiful to be described on mere paper. He asks the youth to credit only himself if he sees anything valuable in poor Billy’s writing, since it was he who inspired it, and he could inspire even the talentless to write something majestic. It is suggested that we canonize the young man to the position of Tenth Muse, more valuable than the 9 in mythology, because anyone inspired by him will write words of eternal value, and should by rights take all the credit.

Will’s Wordplay
The Muses were ancient Greek goddesses of artistic inspiration, and Willy suggests that the young man take his place amongst the 9 women as a more powerful tenth.

“argument” is a synonym for ‘subject’ or ‘theme’.

“dumb” has a dual meaning here, both unable to speak, and thick/unintelligent.

Sylvette Sculpture
A cubist beauty, Sylvette is the title of the portrait of a young woman with the pony tail painted by Pablo Picasso. The model for the painting was (Lydia) Sylvette David, also known by her married name Lydia Corbett, a French woman who worked in a pottery studio not far from his studio in Vallauris, in the spring 1953. Sylvette inspired 40 works by Picasso. His grandson Olivier Widmaier Picasso told the Chicago Sun-Times in 2004 that Sylvette was also the subject of the monumental Chicago Picasso, which had been a matter of curiosity since it was unveiled. She was said to have been an inspiration for actress Brigitte Bardot and the Roger Vadim film And God Created Woman.

The sculpture that adorns the courtyard of NYU’s Silver Towers apartment buildings on Bleecker Street is an enlargement of a sculpture by Picasso. Norweigan sculptor Carl Nesjär executed the construction of the 60-ton concrete Bust of Sylvette in 1967.[1]

Sonnet Project
The Sylvette sculpture was the featured location for Sonnet 38, performed by Anthony Manna, directed by Padmini Devi. The video was released on July 25, 2013.

Regionally, he has appeared in Black Snow and You Never Can Tell at Yale Repertory Theatre. He also spent three summers as a company member at Hope Summer Repertory Theatre, where he appeared in productions of Man of La Mancha, Footloose, Charley’s Aunt, Guys and Dolls, The Game of Love and Chance, The Caine Mutiny Court-Martial, and Once Upon a Mattress.

He received his undergraduate training from the University of Evansville and an MFA from Yale School of Drama.

DIRECTOR – Padmini Devi
Padmini is passionate about storytelling’s power to heal and transform the world we live in. She was a NYC Teaching Fellow and has worked for several award-winning after school media programs. Most recently, her energy has been focused on Producing and Assistant Directing independent films. “Hank & Asha” world-premiered to a warm reception at the 2013 Slamdance Film Festival, winning the Audience Award. It went on to win “Best Producers” at the Brooklyn Film Festival. “Plato’s Reality Machine” and “Dark Mountain” have wrapped post-production and are now in the festival submission process. For her, the world of independent filmmaking is an uncharted ocean where one swims amongst the muses, the octopuses, the sharks and the coral reefs. She believes in the power of imagination to transform our life experiences into meaningful tales that shed light on the human condition, inspiring a world where peace and justice can blossom. She holds her BA in Film Studies from UC Berkeley, MFA in Film Production from the University of Southern California, and EdM in Urban Adolescence Education from Long Island University.