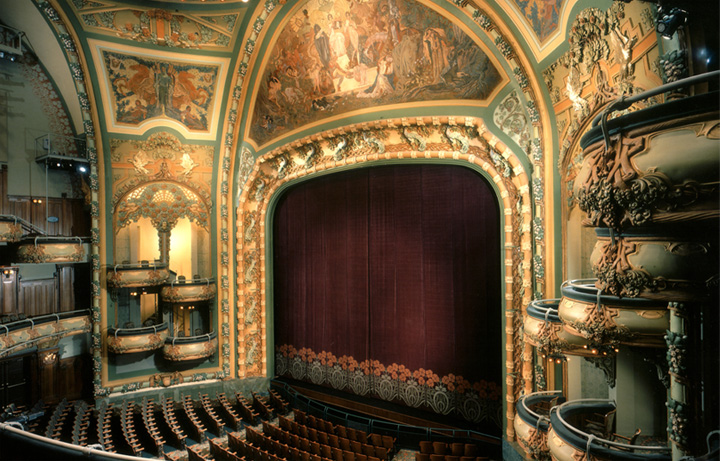 As an unperfect actor on the stage,
Who with his fear is put beside his part,
Or some fierce thing replete with too much rage,
Whose strength’s abundance weakens his own heart;
So I, for fear of trust, forget to say
The perfect ceremony of love’s rite,
And in mine own love’s strength seem to decay,
O’ercharged with burthen of mine own love’s might.
O! let my looks be then the eloquence
And dumb presagers of my speaking breast,
Who plead for love, and look for recompense,
More than that tongue that more hath more express’d.
O! learn to read what silent love hath writ:
To hear with eyes belongs to love’s fine wit.

Sonnet 23 is an apology for being unable to accurately express love in words, and a request for actions to be understood in their place.

Having committed himself a bit more than he intended, Willy is now stuck explaining why at times he is tongue-tied in his love’s company. It is, he says, mainly due to the sheer size of his love, the hugeness of it becoming a burden almost too large to carry. He is like an actor who cannot remember his lines, or a wild beast in a fury thrashing around, achieving nothing for all his efforts. He asks his love come to the rescue by understanding what his looks say, how they speak of the love buried within, even more so than that other guy, who is so glib with his tongue. Although love is blind, he has the ability to hear with his eyes.

An “unperfect actor” is one who is underrehearsed and can’t remember their lines. This is a counter to the “perfect ceremony” he would like to recite.

Glimmers of the Follies, sounds of the Serengeti, and a Genie’s laughter– all of these have graced the stage of the New Amsterdam Theater, in the heart of Times Square. It was built in 1902–1903 and was designed by the architecture firm of Henry Hertz and Hugh Tallant;bthe Roof Garden, where more risqué productions were presented, and which is no longer extant, was added in 1904, designed by the same firm.

From 1913 to 1927, the theatre was the home of the Ziegfeld Follies, whose producer, Florenz Ziegfeld, Jr., maintained an office in the building, and operated a nightclub on the roof [1] George White’s Scandals and Eva LeGallienne’s Civic Repertory Theatre were subsequent tenants. It was used as a movie theatre beginning in 1937, closed in 1985, and was leased by The Walt Disney Company and renovated by Hardy Holzman Pfeiffer in 1995–97 to be the flagship for Disney Theatrical Productions presentations on Broadway [2].

Both the Beaux-Arts exterior and the Art Nouveau interior of the building are New York City landmarks, having been designated in 1979 [3]. In addition, the building was added to the National Register of Historic Places in 1980. Along with the Lyceum Theatre, also built in 1903, the New Amsterdam is the oldest surviving Broadway venue.

“The New Amsterdam was built in 1903 by the partnership of impresarios A.L. Erlanger and Marcus Klaw and designed in the Art Nouveau style by architects Herts and Tallant. At the time of construction, it was the largest theatre in New York with a seating capacity of 1,702. Along with the Lyceum Theatre, also built in 1903, it is the oldest surviving Broadway venue.

The New Amsterdam opened in November 1903 with a production of Shakespeare’s A Midsummer Night’s Dream. For many years, it hosted the Ziegfeld Follies, showcasing such talents as Olive Thomas, Fanny Brice and the Eaton siblings. A racier sister show of the Follies, the Midnight Frolics, played in the New Amsterdam’s roof garden theatre. The New Amsterdam was the scene of Marilyn Miller’s greatest triumphs in the musicals Sally (1920) and Sunny, which opened in September 1925 co-starring Clifton Webb as Harold Wendell-Wendell and ran for three seasons [1]. But the theatre also hosted serious productions, and in June 1927 Basil Rathbone appeared there as Cassius in Julius Caesar.”[3]

“The Great Depression took its toll on the theatre business, and in 1936 the New Amsterdam closed. It reopened on a limited basis in 1937 but soon was converted to a movie theatre. The Nederlander Organization purchased the landmark property in 1982, but it would not be on the road to rehabilitation for another eight years. In 1990, after a court battle, the State and City of New York assumed ownership of the New Amsterdam and many other theatres on 42nd Street. Disney Theatrical Productions signed a 99 year lease for the property in 1993. The theatre, which had recently been used as a filming location for the movie Vanya on 42nd Street, was in shambles; it would take several years and millions of dollars, to restore it to its original usage and grandeur. The roof garden remained closed when it was discovered that it could not be brought up to modern building codes.

The New Amsterdam was officially reopened on April 2, 1997. In November 1997, after the premiere of the film Hercules and a limited engagement of a concert version of King David, Disney’s stage version of The Lion King opened. In June 2006, The Lion King relocated two blocks uptown to the Minskoff Theatre, where it is currently playing in its 18th year. Mary Poppins began previews at the New Amsterdam Theatre on October 16, 2006 and opened on November 16, 2006.” [3]

The New Amsterdam is currently home to Disney’s stage adaptation of Aladdin, which opened in 2014 following an interior renovation.

Joanna Gleason won the Best Actress Tony (Stephen Sondheim’s “Into The Woods”) along with Drama Desk and Outer Critics Circle Awards. Other Broadway and Off-Broadway credits, nominations and awards include: “Sons Of The Prophet”, “Something You Did”, “Dirty Rotten Scoundrels,” Happiness”, “Social Security”, “Joe Egg”, “The Real Thing”, “I Love My Wife”, “Nick And Nora”, “The Normal Heart”, “Something You Did”, “Love Letters”, ”It’s Only A Play”,”Eelymosynary,” “A Hell Of A Town.” Films include: Woody Allen’s “Hannah and Her Sisters” and “Crimes and Misdemeanors” “Heartburn” for Mike Nichols, “The Skeleton Twins” “Mr. Holland’s Opus”, “Boogie Nights” “The Wedding Planner,” “Last Vegas”. T.V. includes recurring roles on “The West Wing” and “Friends”,”The Good Wife” “Tracy Ullman” “Blue Bloods”
Joanna lives with Chris Sarandon on Tiny Farm, She is the author of the forthcoming novel, “Rancho Mirage”. She can tango.

A graduate of Northwestern University, Marco won the 2014 American Advertising Award for Branded Entertainment. The award was given in recognition of a series of short films he directed for the renowned shoe company Lucchese Boots. Marco’s feature directing credits include the documentary, The Reconstruction of Asa Carter. The film recounts the life story of famed Native-American writer Forrest Carter, author of The Outlaw Josey Wales, who was in actuality a prominent member of the KKK. It made its world premiere at the Sidewalk Film Festival before airing nationally on PBS. On the narrative side, he wrote and directed, The Wedding Bros. Starring Jon Polito, Dan Fogler, Brendan Sexton and Zoe Lister Jones, the film is a comedic story about two adversarial brothers who set out to make it big with the King Of Long Island Wedding Videos. It made its premiere at the SXSW Film festival and is being distributed by Universal Pictures/ScreenMedia. His feature writing credits include Finding Cody, one of the first interactive feature films. It stars pop sensation Cody Simpson and was produced by Warner Music.

His editing credits include the feature documentary Beyond the Hedges, which was nominated for a regional Emmy.
Marco’s last short film, Hyper, was chosen for the Centerpiece of the New York Film Festival, where it opened for P.T. Anderson’s Punch Drunk Love. It was honored as the Best Short Short at the prestigious Aspen Shortsfest and was
screened at the San Francisco International Film Festival, the Seattle International Film Festival, and the Edinburgh International Film Festival, among others. Hyper is being distributed by Apollo Cinema and has been seen on Atom
Films, RAI Television, and the Independent Film Channel. Marco’s other shorts have won numerous awards and have been shown on Canal Plus Europe, The Sundance Channel, and United Airlines.

Marco recently directed two national commercials for Empire Beauty School. He is currently in production on two feature documentaries. TX13 follows the 2014 congressional campaigns of the Democratic candidate for Congress in the most
Republican District in the country and the Republican candidate in the most Democratic district. Luchador tells the story of four female wrestlers at Taft HS in the South Bronx. It follows their journey from the high hopes of the first day of practice through the uncertainty of graduation.