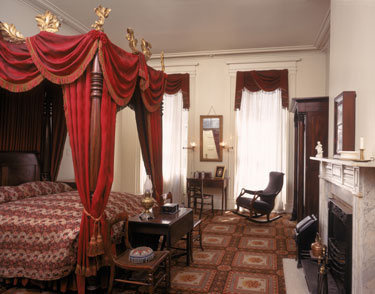 My glass shall not persuade me I am old,
So long as youth and thou are of one date;
But when in thee time’s furrows I behold,
Then look I death my days should expiate.
For all that beauty that doth cover thee,
Is but the seemly raiment of my heart,
Which in thy breast doth live, as thine in me:
How can I then be elder than thou art?
O! therefore, love, be of thyself so wary
As I, not for myself, but for thee will;
Bearing thy heart, which I will keep so chary
As tender nurse her babe from faring ill.
Presume not on thy heart when mine is slain,
Thou gav’st me thine not to give back again.

Sonnet 22 is a romantic image of the literal exchange of lovers’ hearts, and how the effect of each lover’s health therefore touches the well-being of the other.

Bill equates his feeling of youthfulness with the beloved’s youth and beauty, but once he sees his lover age or come to harm, he will feel mortality. He attributes this to the exchange of their hearts. He begs his love to take care of themselves, as Bill does for his lover’s sake, as a mother takes care of her baby. Finally, he warns his subject not to expect a return of their own heart, since such exchanges are for keeps.

A “glass” or looking glass is a mirror.

“time’s furroughs” are wrinkles in your brow

The “seemly raiment of my heart” is the beloved’s beauty Will’s heart is clothed in.

Considered one of the finest surviving examples of architecture from the period, the Merchant’s House has been recognized as a National Historic Landmark (one of only 2,400) and is listed on the National Register of Historic Places. In New York City, it has been awarded landmark status not only for its 1832 late-Federal brick exterior but also for its Greek revival interior rooms.

Of note, the House was among the first 20 buildings designated in 1965 under the City’s new landmarks law. It is the only historic house museum in the Greenwich Village/Soho/NoHo neighborhoods and celebrated 75 years as a museum in 2011.

The Museum’s collection of over 3,000 items comprises the possessions of the Tredwells, the wealthy merchant-class family who lived in the House from 1835 to 1933. The collection includes furniture, decorative arts, clothing, photographs and books, household items, and personal items. Highlights include a suite of 12 mahogany side chairs attributed to renowned furniture maker Duncan Phyfe, a pair of matching six-globe gas chandeliers, and 40 dresses and numerous fashion accessories that belonged to the Tredwell women.[1]

The Museum is open weekly Thursday through Monday and offers regularly scheduled performances, lectures, presentations and other events all designed to heighten the Museum visitor’s experience and shed light on the many facets of life in New York City in the 19th Century. Visit the Museum website – www.merchantshouse.org – for further info, a calendar of upcoming events, and updates about the House, the Museum, and life in Antebellum New York.

And, if you’d like to learn more about the museum and see some of what you’ll engage with during a visit, you can watch a great documentary that was created as part of the Blueprint NYC series. Link to the film HERE.

Some say the Tredwells, who lived in this house for nearly 100 years, are still here. Gertrude Tredwell, in particular, is thought to be watching over her family home. Born in an upstairs bedroom in 1840, Gertrude never married and lived her entire life here until she died, at the age of 93, in 1933. She was the last member of the Tredwell family to occupy the house before it became a museum, in 1936.

Since the 1930s, tales of strange and unexplainable happenings have surrounded the Merchant’s House. Staff, volunteers, visitors, neighbors, even passersby, have reported seeing, hearing, and smelling things that weren’t there.

In 2007, the Museum decided to mount its own investigation with the help of Historic Paranormal Investigations, a NYC-based group. The evidence is mounting that, indeed, something is here. [2]

Alex Harvey is a director, writer, filmmaker, musician, teacher and event producer based out of Brooklyn.
Regional theatre directing credits include O Lovely Glowworm for American Conservatory Theater, Underneath the Lintel at the Alley Theatre, regional premieres of Will Eno’s Oh, The Humanity, Noah Haidle’s Mr. Marmalade for Stages Repertory and I Am My Own Wife for Stages Repertory Theatre in co- production with Stage West Des Moines, a five-person staging of Macbeth for the Mirror Repertory Company in New York and his own radical adaptation of The Mock-Tempest for Shakespeare Santa Cruz. His 2013 production of Waiting For Waiting For Godot won Best of the NY Fringe and was extended twice in the Fringe Encores program. He has developed work and lead workshops at NYTW, Steppenwolf, Lincoln Center, Long Wharf and the Edinburgh Fringe. And has taught as a guest lecturerer at UCSD and UC Berkeley. Alex works at the Graduate Acting and Design programs at NYU Tisch as a director and mentor to the MFA candidates. For NYU/MFA he wrote and directed The Humans Are in Trouble, Careless Marjory and an adaptation of Nabokov’s Pale Fire. For NYU he also created a loose adaptation of Sheridan’s The Rivals. With renowned composer John Gromada and author Michael Pollan, Alex remade Pollan’s book, The Botany of Desire, into an opera which has been developed at American Conservatory Theater, The Orchard Project and UC Berkeley, where Alex and Gromada were artists-in-residence at the Arts Research Center. Alex is the Associate Artistic director of the Lake Lucille Project – an event theatre collective that, since its inception in 2003, has produced the complete works of Chekhov in site-specific immersive stagings on the shores of Lake Lucille in New City, New York. For writer/producer Beau Willimon Alex directed a site-specific Balm in Gilead in June of 2011 in a warehouse in Industry City, Brooklyn.
As a music/event producer he conceptualized and co-composed a live scoring interactive performance of Buster Keaton’s The Balloonatic for The Public Theater’s Under the Radar Festival as well as a multidisciplinary evening of music and music hall for the New York John Hartford Festival at Little Field in Brooklyn. His old time Jazz collective The 5000 Jazz Assassins are currently partnered with the Bourne Music Company to develop a series of new master recordings of previously unrecorded songs from the 20s and 30s to be made available for commercial license in 2015. Alex has recorded on many albums and can be heard around town playing a variety of instruments with Michael Cerveris’ Loose Cattle. He can also be seen playing his mandolin nationally on Geico’s “Happier Than” television campaign.

Recently Alex has entered the world of directing for tv and film. In 2013 he served as apprentice director on Boardwalk Empire’s fourth season under master director Allen Coulter. He is currently co-directing Lake Lucille Project’s hybrid narrative/documentary, A Seagull. And he is also currently in pre-production development for his cinematic adaptation of Walden which shoots in Colorado in 2015.

Miklos Buk is a cinematographer living and working in New York City. He was a DP on feature films such as John Harkrider’s Mitchellville (2nd Camera, 35mm, 2003), Tony Spiridakis’ Noise (2nd. Camera, 16mm, 2004), and George Pinter’s The Dump (35mm/DV, 1998), also Pearl Gluck’s The Divan. Before moving to New York he’d been the DP on several shorts including Ambulance (16mm, Film Academy of Budapest, 1996), which won awards at the Bologna Short Film Festival and Milan Film Festival. Since 2000 Miklos has been living and working in New York. He has been involved in several projects with Michel Gondry, Brian Mertes, Joan Stein, Don Coppola and Jon Schumacher. He graduated at The American Film Institute Conservatory with MFA. Also he was trained and received an BA at the Academy of Theater and Motion Picture Arts in Budapest, Hungary, 1995 – 2000, and was selected to be part of the Kodak Master Class of Worldwide DP Students in 1997 in Budapest.