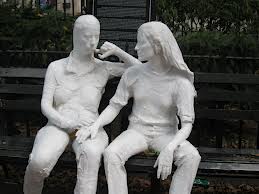 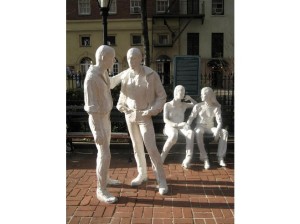 A woman’s face with nature’s own hand painted,
Hast thou, the master mistress of my passion;
A woman’s gentle heart, but not acquainted
With shifting change, as is false women’s fashion:
An eye more bright than theirs, less false in rolling,
Gilding the object whereupon it gazeth;
A man in hue all hues in his controlling,
Which steals men’s eyes and women’s souls amazeth.
And for a woman wert thou first created;
Till Nature, as she wrought thee, fell a-doting,
And by addition me of thee defeated,
By adding one thing to my purpose nothing.
But since she prick’d thee out for women’s pleasure,
Mine be thy love and thy love’s use their treasure.


Analysis
Sonnet 20 compares the fair youth’s appearance to that of a woman, and says its a pity for a male admirer to be unable to partner him

Will’s subject is “the master-mistress of [his] passion”. He has the grace and beauty of a woman but is devoid of the guile and pretense that comes with women; those wily women with eyes ‘false in rolling’, who change their moods and affections like chameleons. Despite all his womanly charms, he has “one thing” like a man, meaning he was made to partner a woman, making the love of the admirer sadly moot.

Will’s Wordplay
“with Nature’s own hand painted” means the subject is a natural beauty, with no need of cosmetics

The “one thing” the subject has that women do not is male genetalia. Real subtle, Billy-boy.

Scholar’s Corner
The modern reader may read sonnet 20 and question whether or not Shakespeare’s sexuality is reflected in this sonnet. When looking at the sexual connotations in this sonnet it is important to reflect on what homoerotism meant during the time that Shakespeare was writing. Casey Charles discusses the idea that there was no official identity for a gay person at this time. There were words that identified what we would consider to be homosexual behaviour, but the idea of a “gay culture” or “gay identity” did not exist.Charles goes on to say that early modern laws against sodomy had very few transgressors, which means that either people did not commit these crimes of homosexuality or these acts were more socially acceptable than the modern reader would think. Shakespeare’s awareness of the possible homoeroticism in Sonnet 20 does not necessarily illuminate whether or not he himself was actually practicing homosexual behavior.[1]

Gay Liberation, Christopher Park
In the 1970s, Christopher Street became the “Main Street” of gay New York. Large numbers of gay men would promenade its length at seemingly all hours. Gay bars and stores selling leather fetish clothing and artistic decorative items flourished at that time. This changed dramatically with the loss of many gay men during the AIDS epidemic in the 1980s. The apparent center of gay life subsequently shifted north of 14th Street to Chelsea. This new area, however, was never as vibrant as the old West Village. While some gay bars remain on Christopher Street, it has largely lost its gay character and is not unlike other quiet thoroughfares in the Village.

Christopher Street is the site of the Stonewall Inn, the bar whose patrons started the 1969 Stonewall riots that are widely seen as the birth of the gay liberation movement. The Christopher Street Liberation Day Committee formed to commemorate the first anniversary of that event, the beginning of the international tradition of a late-June event to celebrate gay pride.The annual gay pride festivals in Berlin, Cologne, and other German cities are known as Christopher Street Day or “CSD”.

Since 1992, Christopher Park (at the intersection of Christopher, Grove, and W 4 Sreets) has been decorated with the sculpture Gay Liberation by George Segal to commemorate the gay rights traditions of the place.

About the Sculptures
“Located at 51-53 Christopher Street, Stonewall Inn was formerly two adjacent two-story stable houses erected in 1843 and 1846. After numerous alterations, the two buildings were joined into a restaurant by the 1930s. By the 1950s the place was known as Stonewall Inn Restaurant. In 1966, it closed for renovations, and reopened in the following year as a private club known as Stonewall Inn – a bar and dance hall which, like numerous local establishments, catered to the homosexual community of Greenwich Village.

In the early hours of June 28, 1969, police raided the Stonewall Inn and a melee ensued in which 13 people were arrested. Word of the raid and the resistance to it soon spread, and the next day hundreds gathered to protest the crackdown and advocate the legalization of gay bars. Further protests erupted in early July, and on July 27, a group of activists organized the first gay and lesbian march, from Washington Square to Stonewall. The events of that summer and their aftermath are often credited as the flashpoint for the gay rights movement in the United States.
A decade later, Peter Putnam (1927–1987), a wealthy arts patron from Louisiana and trustee of the Mildred Andrews Fund, commissioned the Gay Liberation monument. With Putnam as its steward, the Fund had commissioned other contemporary sculptures, notably George Segal’s Kent State Memorial and Richard Hunt’s Harlem Hybrid. Though Segal was not the first artist approached, he accepted the commission, which stipulated only that the work “had to be loving and caring, and show the affection that is the hallmark of gay people . . . and it had to have equal representation of men and women.”

George Segal was an important and influential American artist in the late 20th century. Born and raised in New York City, he settled in 1940 on a farm in South Brunswick, New Jersey… Some of his more noteworthy pieces include The Holocaust (1982) in San Francisco’s Golden Gate Park, The Commuters (1982) in New York’s Port Authority Bus Terminal, and his three tableaux for the Franklin Delano Roosevelt Memorial in Washington, DC. (1995). Segal’s conception for Gay Liberation is typical of his work. Four figures – two standing males and two seated females – are positioned on the northern boundary of the park, in natural, easy poses. Using a process in which bronze casts are made from plaster moulds from the human models, Segal tempers the realistic surfaces with an unearthly white-painted finish. The result is specific, evocative, and understated, showing the public comfort and freedom to which the gay liberation movement aspired.

Though the work had received all of its community and design approvals by 1982, public opposition and a planned renovation of Christopher Park (completed in 1985) sidelined the project for years. In the meantime, a second cast of the piece was installed on the campus of Stanford University in Palo Alto, California. On June 23, 1992, Mayor David N. Dinkins and Parks Commissioner Betsy Gotbaum helped unveil the monument in Christopher Park. The initial opposition and rancor which had greeted the project had subsided; the advent of AIDS, which had devastated the gay community in particular, added another poignant dimension to the monument and its mute figures’ impact. In March 2000, Stonewall Inn was designated a National Historic Landmark. Today, Segal’s sculpture is a popular pilgrimage site for tourists and local residents alike.”

Sonnet Project
Gay Liberation in Christopher Park was the featured location for Sonnet 20, performed by Eric Percival, directed by Guy Patton. The video was released on May 30, 2013.

ERIC PERCIVAL
Eric started his acting career at a young age, forcing his dad to replay scenes from Superman II and Return of the Jedi over and over again in their backyard in Ridgefield, CT. His mother wisely decided to give his dad a break by signing Eric up for a local children’s theater group called Spotlight Theater Workshop, where he spent many years joyfully receiving his introduction to a wealth of wonderful roles from Petruchio to Don Quixote, from Beelzebub to P.T. Barnum.

His appetite whetted, Eric had no choice but to continue his pursuit of acting full force as a Theatre and Philosophy double major at Connecticut College, where he spent a semester immersed in acting at the National Theatre Institute under the tutelage of Richard Digby Day. Following college, he traveled to London to complete his training at the London Academy of Music and Dramatic Art (LAMDA), where he mastered the classics (and acquired proficiency in a variety of UK accents amongst a nation of native speakers). During his time overseas, Eric enjoyed the privilege of performing Shakespeare for audiences throughout London, Germany, and Holland.

Back in NYC, Eric has acted on many Manhattan stages, winning Best Actor awards for performances in the Midtown International Theater Festival (MITF), and the Planet Connections Festivity. Favorite shows include Rosencrantz and Guildenstern are Dead at the T. Schreiber Studio (in the delicious role of Rosencrantz), Hamlet Bound and Unbound in MITF (as a crazed actor who takes a play hostage and forces the cast to perform Hamlet with him at gunpoint), and Island; or To Be or Not To Be (his debut performance with New York Shakespeare Exchange, in which he originated the role of King John).

Eric is thrilled to continue his work with NYSX as a part of the terrific Sonnet Project. For more information on his current projects, see his website at www.ericpercival.com.

GUY PATTON – Director
Writer/Director/Actor Guy Patton studied at the prestigious Upright Citizens Brigade Theatre in NY, eventually becoming a member of several of the theatre’s in-house sketch comedy teams, including the longest-running UCB sketch ensemble, Stone Cold Fox. A veteran broadcaster, Guy presently works as an executive producer for Cumulus Media Networks, and has written comedy for the Onion News Network and MTV. He was the head writer and director of the much-beloved Hipster Show with Andy Rocco, and he created and hosted the surrealist variety show Salvador Dali’s Danza Macabre for the UCB stage. Guy’s comedy videos have appeared on College Humor, UCB Comedy and Channel 101 NY, and have garnered over a million views. He recently wrapped post-production on his first feature film, the surprisingly unfunny action thriller Pearl, a teaser trailer for which can be viewed at www.pearlfilm.com. Guy graduated from the University of North Florida (go “Ospreys???”), where he studied literature and even got to play Hotspur in Henry IV. He lives in Jersey City, NJ.