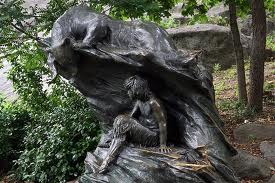 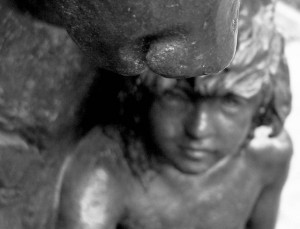 Devouring Time, blunt thou the lion’s paws,
And make the earth devour her own sweet brood;
Pluck the keen teeth from the fierce tiger’s jaws,
And burn the long-lived phoenix in her blood;
Make glad and sorry seasons as thou fleet’st,
And do whate’er thou wilt, swift-footed Time,
To the wide world and all her fading sweets;
But I forbid thee one most heinous crime:
O! carve not with thy hours my love’s fair brow,
Nor draw no lines there with thine antique pen;
Him in thy course untainted do allow
For beauty’s pattern to succeeding men.
Yet, do thy worst old Time: despite thy wrong,
My love shall in my verse ever live young.

Analysis
Sonnet 19 treats the theme of redemption of time through art– for there immortality lies.

Billy directly addresses Time, and lists all of the conventional damage Time does which is customary and known to all, killing sweetness and beauty everywhere. It can even do its worst against the youth, the poet’s love. But the youth will survive in eternal youth and beauty because of the verses made to celebrate him, and the poet’s love for him.

Will’s Wordplay
To “fleet” is to fly by

Bear and Faun Statue, Morningside Park
Officially titled The 1914 Alfred L. Seligman Fountain, “this striking bronze sculpture by Edgar Walter (1877-1938) is also known as Bear and Faun. It was dedicated in 1914 in memory of Alfred L. Seligman (1864-1910), vice-president of the National Highways Protective Association. Ironically, Mr. Seligman was killed in an automobile accident in 1910.

For his years of public service in a relatively brief lifespan, friends of Seligman commissioned this sculpture at a cost of $2,000, and gave it to the City as a gift to its children. At the dedication ceremony on May 17, 1914 Parks Commissioner Cabot Ward and Frederic R. Coudert, president of the National Highways Protective Association, delivered addresses.

In his speech, turning over the work of art to the City, Coudert commented, “Alfred Lincoln Seligman sought not for fame, but in his comparatively short life he devoted much of his time to the young people of the City, in offering them opportunity for instruction in the art of music. It is because of his attitude toward the children and his work for their safety, health and happiness that this monument to his memory is peculiarly appropriate.”

About seven feet in height, the fountain depicts a bear overhanging a grotto in which a small faun (half man, half goat) plays on the pipes. The picturesque fountain, with a drinking apparatus for humans, and a basin for dogs to drink from, is situated at the foot of a staircase on the eastern edge of the park near the 114th Street entrance.” [1]

Sonnet Project
The Bear and Faun Statue was the featured location for Sonnet 19, performed by Annie Paul, directed by Becky Lane. The video was released on June 13, 2013.

ANNIE PAUL
Annie has most recently worked on two projects produced by Shakespeare Exchange in NYC. She was a featured performer in their ShakesBEER Pub Crawl and also filmed a sonnet for their exciting new Sonnet Project. Annie also just finished shooting three episodes of The Chanticleer, produced in Ithaca by Nice Girl Films. Other NYC credits include: Pride from the Door (world premiere staged reading), As You Like It, at Soho Rep & The Wonder, at Theatre Row (both produced by The Queen’s Company), Bus Stop, Twelfth Night, and Love, Lust & the Green Eyed Monster. Some favorite regional credits include: Wait Until Dark at The Human Race Theatre, Big Love, As You Like It, Heartbreak House, and Pride and Prejudice at The Cleveland Play House, and Playboy of the Western World at American Players Theatre. TV credits include: Boardwalk Empire and The Unusuals. Annie is also a company member at The National Comedy Theatre in New York City and a is member of AEA & SAG/AFTRA.

BECKY LANE – Director
Becky Lane is an independent filmmaker and founder of Nice Girl Films, a small woman-centered production company with footprints in both Ithaca, NY and New York City. Her short films, Hens & Chicks, Poker Face and Happy Hour have collectively screened at over 80 film festivals worldwide, garnering great acclaim and awards, including Best Short Film Audience Award in Rochester, Barcelona, London, and Durham. Prior to this, Lane concentrated on digital media, spearheading the development of award-winning, socially conscious web sites and Internet video for institutions such as Cornell University and the Women’s Sports Foundation founded by Billie Jean King. While Lane initially trained as an actor, it soon became apparent that her interests, skills and versatility were a perfect match for directing. She is currently developing a feature-length film for production in 2013. Lane holds a Ph.D. from the University of Iowa. As a sociologist and filmmaker, Lane’s distinctive projects entertain while exploring provocative cultural complexities

ELISSA BAKER – Assistant Director
This marks Elissa Baker’s debut into the cinematic arts. She graduated from the University of Illinois. Prior to college she was involved in small theater productions in Iowa. She is thrilled to focus on creating art through cinema while teaching her son that life is compelling, fascinating and full of joy and opportunity. Elissa has traveled to New York City to work as an assistant director and is currently working with Becky Lane and Nice Girl Films to market and produce a web series. She lives in Chicago with her husband and son.

NONI KORF – Editor/Animator
Noni Korf has been working in film since she started out with a single-8 camera making stop-motion animations in grade school. She’s continued working in photography, film, and video, graduating from Cornell with a self-designed media arts degree. Her love for image-making and interest in all aspects of film and video production led her to work in Tokyo, Los Angeles, and New York City as a production manager for industrial films, television commercials, news features, and music videos. She loves being behind the camera; her work can be seen this year in the award-winning documentary, My Mother’s Journey, by Sam and Kirsten Hampton. As an editor, her credits include work on documentaries, experimental films, music videos, and now, with this year’s Hens and Chicks, narrative short-fiction. She lives and works in New York.