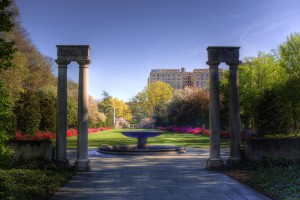 When I consider every thing that grows
Holds in perfection but a little moment,
That this huge stage presenteth nought but shows
Whereon the stars in secret influence comment;
When I perceive that men as plants increase,
Cheered and checked even by the self-same sky,
Vaunt in their youthful sap, at height decrease,
And wear their brave state out of memory;
Then the conceit of this inconstant stay
Sets you most rich in youth before my sight,
Where wasteful Time debateth with decay
To change your day of youth to sullied night,
And all in war with Time for love of you,
As he takes from you, I engraft you new.

Analysis
Sonnet 15 warns the beautiful young man that even though he is beautiful, the whole world is in a constant war to preserve beauty.The poet strives to immortalize his dear friend in verse, thereby saving him from the ravages of all-consuming Time.

The opening thought touches on the perennial theme of mortality which so much engrosses Will’s attention. He perceives the hand of doom in of nature’s processes, and extends the observation to its effect on the beloved youth. Such beauty and perfection is in the young man that the whole world is warring against Time in an effort to prevent his gradual decline from youth into age and death. Will finishes by telling his admired subject his part in the war: that in this verse, he will live and be immortalised and his beauty will remain eternally new.


Will’s Wordplay
The stars’ “secret influence” is a technical astrological term. It refers to Renaissance beliefs that ethereal fluid, or influence, flowed from the stars and affected men’s lives.


Scholar’s Corner
According to Helen Vendler, the sonnet is the first to employ Shakespeare’s grand microcosmic scale, more suited to philosophy than a sonnet about love. Shakespeare begins the poem by with the speaker “look[ing] on life from the vantage point of the stars above in his consideration; yet he sees as well from a helpless human perspective below.” The poem then introduces a “retrospective reading of ingraft.”that denotes immortalizing the youth that continues in Sonnet 16. [1]

“Upon entering Brooklyn Botanic Garden from its Eastern Parkway entrance, the first space you encounter is the Osborne Garden, a semi-formal garden where the art of Italianate landscaping comes to life. With ten wisteria-draped pergolas framing an emerald lawn, a bolder wall with large plantings of varied colored and textured plants, several stone features, and benches, the garden is a soothing oasis in the midst of the city. In spring, daffodils, pansies, and tulips bloom, followed by crab apples and cherries, which gradually give way to azaleas, rhododendrons, wisterias and dogwood. The focal point of the plaza is a water basin more than 17 feet in diameter. The fountain sits within a semicircle of limestone benches with curious acoustic properties. Sit at one end, and you can whisper clearly to someone sitting at the opposite side. These “whispering benches” are a much beloved feature to this lush space.”[1]


History
“The Osborne Garden was designed in 1935 by landscape architect Harold Caparn and dedicated to Dean Clay Osborne in 1939 by his wife Sade Elizabeth Osborne. It was designed as a showcase for ornamental plants and built in part by laborers in the Civil Works
Administration and the Works Progress Administration. 1947, landscape architect Alice Recknagel Ireys designed plantings of large masses of white, red, and pink azaleas, rhododendrons, wisterias, and evergreens to frame the central lawn. The garden is continually undergoing incremental improvements while remaining true to this original intention. Over time the variety of plants in this collection has grown with the addition of autumn interest foliage as well as Dogwood trees and a beautifully manicured Carpinus hedge. A recent renovation of the Boulder Wall is highlighted by the choice of plants that repeat the patterns, textures, and colors represented throughout the garden.” [2]


Plants
“The three-acre, Italian-style formal Osborne Garden is a kaleidoscope of color in May with azaleas, rhododendrons, crabapples, and wisteria draped over 10 wood and stone pergolas. Evergreens and flowering fruit trees such as cherries and crab apples shade the walkways while the rhododendrons and azaleas line the paths, and on the west side is a boulder wall with bulb and herbaceous plantings and accented with shrubs, perennials, and annuals.” [3]


Sonnet Project
Osborne Garden was the featured location for Sonnet 15, performed by Michael Lopez, directed by Melinda Crespo. The video was released on May 7th, 2013.

Michael E. Lopez- Firstly, Thanks to everyone at NYSX for inviting me to be a part of The Sonnet Project. I first worked with Ross Williams and Kevin Brewer on a production of Hamlet,playing Polonius, which led several years later to Escalus in Kevin Brewer’s wonderful play ISLAND directed by Ross Williams. It all comes around.

Originally from the NY area, high school years in Jersey City NJ, college years at Marquette University in Milwaukee, Wisconsin where the major area of study was Theatre and Education. Moved to the big bad apple when it was still big and bad…late 1970’s. Studied with Sandy Dennis at HB Studio and Classical study with Michael Moriarty at his then-popular company Potter’s Field. First professional job was at the now defunct 18th Street Playhouse in a production of Marc Blitzstein’s The Cradle Will Rock. Great review from the NY Times. Sold-out performances. 22 years old. Sweet.

Phase two was an interest in dance and drums. Started to study Afro-Haitian dance in NY with an eventual move to the cradle of ethnic dance—San Francisco. Studied and danced with the remarkable Blanche Brown and her company Roots of Haiti. Held workshops throughout the Bay Area, Seattle, London and retreats in Santa Fe. Sweet.

Re-traced acting roots, and after a two season stint with the International Theatre in Vienna,Austria( Art, Copenhagen, Dracula, Sylvia, two Xmas Carols)moved back to NYC. Credits have included work with NY Classical Theatre (Boyet in Love’s Labor’s Lost and Lafew in All’s Well That Ends Well), Propero in The Tempest with Expanded Arts, Dr. Dorn in The Seagull with Columbia Stages, the Summer Reading Series with the Pearl Theatre and Regional work with Arkansas Rep, New Jersey Rep, Northern Stage, the Magic Theatre, Nevada Shakespeare Company and Berkeley Rep.

Phase Three: Melded artistic and academic strengths into teaching ESL to many people at many levels from many countries to make a better life. It is very fulfilling.

It all comes around. Sweet.

Melissa Crespo is a New York City based Director and Producer. She was born and raised in Stamford, Connecticut where she dreamed of becoming an actor. She constantly begged her mother to take her to auditions in NYC but eventually moved to Northern VA where she fell in love with Shakespeare. While serving as a counselor (and yes she is a former camper!) at the American Shakespeare Center’s Young Company Theatre Camp in Staunton VA, she realized her calling as a director and has never looked back. Melissa began directing plays in undergrad at The University of Virginia and upon graduating landed the Allen Lee Hughes Directing Fellowship at Arena Stage in Washington D.C. Since then, she has served as a Van Lier Directing Fellow at Second Stage Theatre where she assisted Michael Mayer on Everyday Rapture starring Sherie Rene Scott. Melissa has directed and assisted at various theaters along the East Coast including: ¡Figaro! (90210) with Morningside Opera, Sarah Ruhl and Todd Almond’s Melancholy Play with 13P, Camino Real at New York University, 9 Parts of Desire at The Contemporary American Theatre Festival and The Nutcracker at Pistarckle Theatre in St. Thomas, Virgin Islands. As a producer, she coordinated the Second Stage New Works Festival commissioned by Time Warner. Melissa received her MFA in Directing from The New School for Drama and is thrilled to be a part of The Sonnet Project. Visit http://melissacrespo.com.