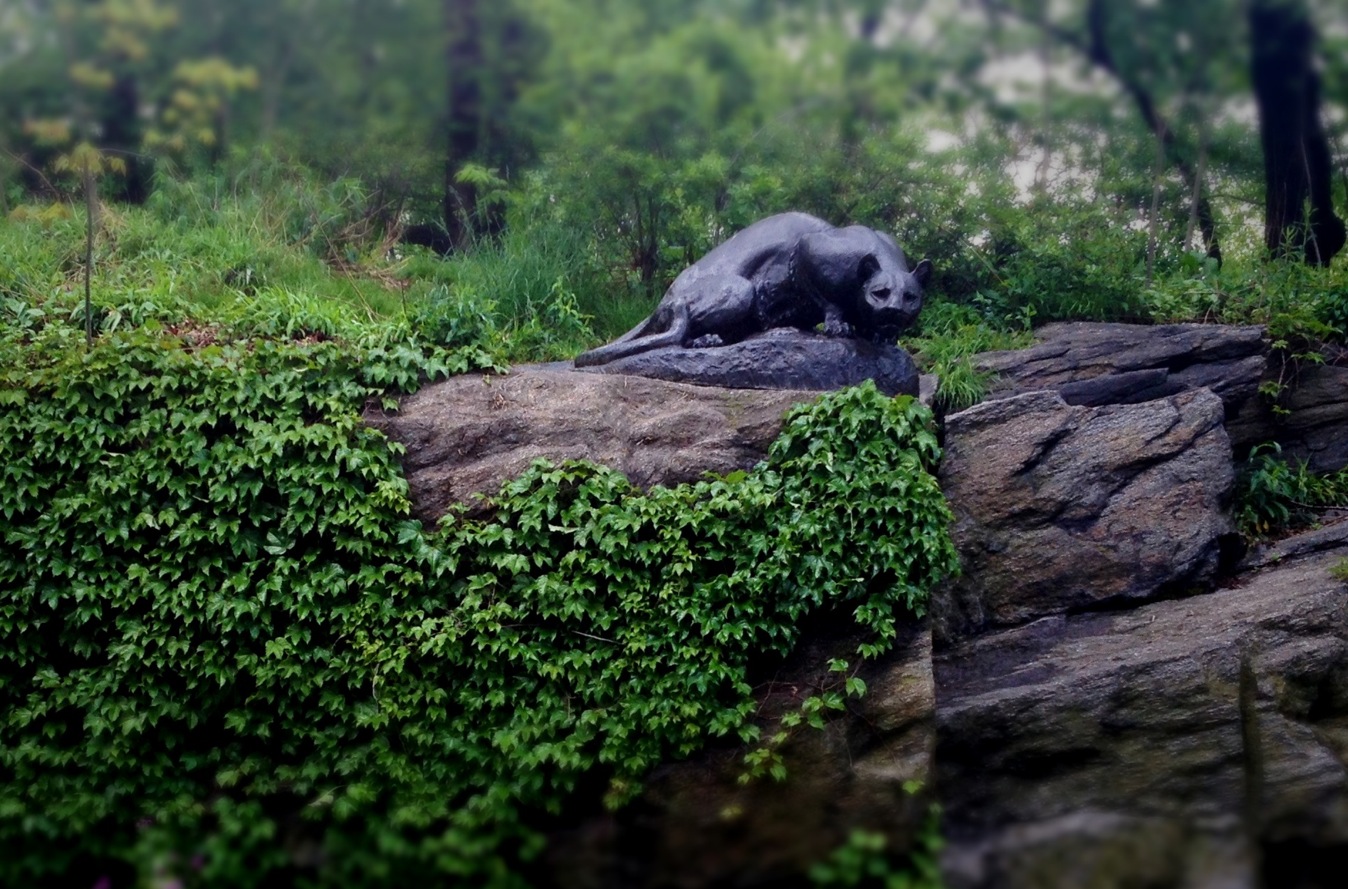 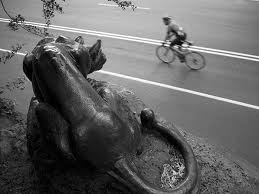 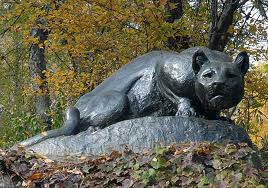 In faith I do not love thee with mine eyes,
For they in thee a thousand errors note;
But ’tis my heart that loves what they despise,
Who, in despite of view, is pleased to dote.
Nor are mine ears with thy tongue’s tune delighted;
Nor tender feeling, to base touches prone,
Nor taste, nor smell, desire to be invited
To any sensual feast with thee alone:
But my five wits nor my five senses can
Dissuade one foolish heart from serving thee,
Who leaves unswayed the likeness of a man,
Thy proud heart’s slave and vassal wretch to be:
Only my plague thus far I count my gain,
That she that makes me sin awards me pain.

Analysis
Sonnet 141 claims there is no logic or sensual admiration to the poet’s love of his subject, but that hasn’t stopped him from becoming a slave.

Bill swears his eyes are not the reason he loves his lady, because they see all the flaws. His heart loves what his eyes cannot. His ears dislike the sound of her voice, he finds touching her indelicate and wants not to taste or smell of a feast in which she is the main course. But nothing can dissuade his foolish heart from serving her. He is an empty shell of a man, while his heart is her slave. The only upside to the sin of loving her is the reward of pain he receives.

Will’s Wordplay
In the Elizabethan era there were commonly reckoned to be five wits and five senses. The five wits were sometimes taken to be synonymous with the five senses, but were otherwise also known and regarded as the five inward wits, distinguishing them from the five senses, which were the five outward wits. The concept has its origins in the works of Aristotle (who only defined four senses, however). The concept of five outward wits came to Medieval thinking from Classical philosophy, and found its most major expression in Christian devotional literature of the Middle Ages.This poem is thought to rely heavily on “The Banquet of the Senses”, an allegorical story based on the works of Ovid.

Still Hunt Statue, Central Park, Manhattan
“This animal sculpture, referred to alternately as a panther or a mountain lion (both names for the same species, Felis concolor), is by Edward Kemeys (1843–1907). Situated on a rock in a thicket beside Central Park’s East Drive at 76th Street, the bronze feline crouches on a natural rock outcropping in a masterful example of site-specific art.

Kemeys was born in Savannah, Georgia in 1843. His interest in animals is said to date from a summer when, at age 13, he lived on a farm in Illinois that was surrounded by frontier wilderness. After serving as an artillery officer in the Civil War, and an unsuccessful attempt at farming, he was employed in the late 1860s for two dollars a day as an axe-man on the engineering corps that prepared the grounds for the construction of Central Park.

Kemeys later recalled that while working in Central Park, he took pleasure in observing wild animals, and was inspired in 1869 when he saw an old German sculptor fashioning the head of a wolf at the Central Park Menagerie. “Quick as lighting came the thought…I can do that!” Kemeys reminisced. He soon obtained modeling material, and began crafting a sculpture of a wolf himself. Three years later, Kemeys received a commission for his sculpture, Two Hudson Bay Wolves Quarreling Over the Carcass of a Deer, which stands in the Philadelphia Zoological Gardens in Fairmont Park, Philadelphia.

In 1883, Kemeys made Still Hunt, which was cast at the local Maurice J. Powers foundry, given to the City, and placed in Central Park. Kemey’s smaller bronze castings of animals gained the attention of the Art Institute of Chicago, which in May 1885 mounted a special exhibition of his work entitled “Wild Animals and Indians.” Through his affiliation with the Institute, he received the commission to sculpt the lions that flank the entrance of the museum; they were unveiled on May 10, 1894. The bronze statues were based on earlier models Kemeys displayed at the World’s Columbian Exposition in Chicago the previous year. His colossal head of a buffalo is in the Pacific Railroad station in St. Louis, and 50 of his bronzes are in the collection of the National Gallery.

Still Hunt combines convincing natural observation with stylized detail. In 1937, the Parks monuments crew repatined the piece and secured it to the natural rock outcropping. In 1974, the sinuous tail was stolen, but a restoration in 1988, under the auspices of the Municipal Art Society’s Adopt-A-Monument Program, replicated this missing feature and reconditioned the surface of the bronze statue. Today, the Central Park Conservancy maintains the sculpture, which continues to inspire awe in weary and unsuspecting joggers as they arrive at the crest of Cedar Hill.” [1]

ACTOR – Carlo Alban
Carlo Albán has been acting in theater, film and television for over twenty years. Originally from Ecuador, he moved to the US with his family when he was seven. He has appeared on television shows ranging from Sesame Street to Prison Break, and in films such as Whip It, Margaret and 21 Grams. As a writer, he developed his solo show Intríngulis, dealing with his experiences growing up as an undocumented immigrant, with Labyrinth Theater Company. Intríngulis received its world premiere in November 2010 in Los Angeles, in conjunction with Labyrinth and the Elephant Theater, and was produced in New York in 2011 by INTAR. Other favorite theater credits include: Jose Rivera’s References to Salvador Dali Make Me Hot at the Public Theater; the world premiere of Octavio Solis’ Lydia at the Denver Center, Yale Rep and the Mark Taper Forum; and most recently Bruce Norris’ A Parallelogram, also at the Mark Taper Forum under the direction of Anna Shapiro. Carlo is a member of Labyrinth Theater Company and a recipient of New Dramatists’ Charles Bowden Award.

DIRECTOR – Brendan Averett
Brendan Averett started acting as a senior in high school after his father suggested he take a drama class as an elective – perhaps to get Brendan to do something constructive with his silliness. This small breakfast table suggestion changed his life forever. After graduating from high school, two years of studying biology at San Jose State University and doing theatre on the side, he abandoned his childhood dream of becoming a genetic engineer and moved to Los Angeles to study acting at the American Academy of Dramatic Arts in Pasadena.

After graduating in 1993 and stage managing a couple of shows, Brendan continued his study by attending the British-American Drama Academy’s “Midsummer in Oxford” conservatory program. Upon returning, he landed his first acting job playing Pistol in Henry V. Since then, he has performed in 38 plays – almost half of which have been productions of Shakespeare.

He is the 2003 Fellow for the Chicago Associates of the Stratford Shakespeare Festival of Canada, attended the festival’s conservatory program and went on to perform for two seasons there. He has performed at many theaters across the nation including Will Geer’s Theatricum Botanicum in Los Angeles, The Goodman, as well as The Court Theatre in Chicago, Cincinnati Playhouse in the Park, Saint Louis Repertory, Actors Theatre of Louisville, Yale Repertory and The Public Theater’s Shakespeare in the Park.

In Fall 2013, he will perform in Julie Taymor’s production of A Midsummer Night’s Dream at Theatre for a New Audience in Brooklyn.