From fairest creatures we desire increase,
That thereby beauty’s rose might never die,
But as the riper should by time decease,
His tender heir might bear his memory:
But thou, contracted to thine own bright eyes,
Feed’st thy light’s flame with self-substantial fuel,
Making a famine where abundance lies,
Thyself thy foe, to thy sweet self too cruel.
Thou that art now the world’s fresh ornament
And only herald to the gaudy spring,
Within thine own bud buriest thy content
And, tender churl, makest waste in niggarding.
???Pity the world, or else this glutton be,
???To eat the world’s due, by the grave and thee.

Analysis
Sonnet 1 bids the subject, a handsome young man, to create an heir so that he might taste immortality.

Shakespeare begins by exalting the young man’s physical beauty, before changing to a tone of contempt for his lack of a desire for an heir.Then, the sonnet shifts from a tone of admiration to a critical tone. Bill accuses the young man of being betrothed to himself, leaving nothing behind where there could be “abundance”, thus becoming his own enemy. It is a crime against man and nature to just simply eat away at “the world’s due” without reproducing. He calls the young man new, young, beautiful, and vital and implies that perhaps there were others before, but they are dead. He deems his beloved a worthless sinner for not procreating, though he still loves them. The man is selfish with his beauty, refusing to let the world see it in bloom, so Bill ends by saying his beloved may be a “bud”, but wouldn’t he rather be a flower to the world? To not bloom is to make waste. The ominous couplet serves as a prophetic threat of an empty death without offspring to carry on the beloved’s legacy.

Will’s Wordplay
Shakespeare’s pun on the word “tender” (to mean both youth and beauty as well as currency to alleviate a debt) further illustrates the beloved’s need to reproduce in order to pay off his debt of chastity.

“But thou, contracted to thine own bright eyes”, is not only complimenting his handsome subject, but is also scolding him for his chastity. Will then goes on to give the imagery of a candle eating itself, (“Feed’st thy light’s flame with self-substantial fuel”), an image of gluttony

Shakespeare describes the selfishness of the beloved, contrasting allusions to a famine in the second quatrain with allusions to gluttony by saying that the beloved is “eat[ing] the world’s due” by dying without offspring.

The word “buriest” suggests the youth digging his own grave and the end to his beauty.

Scholar’s Corner
Helen Vendler comments on the overall significance of this sonnet:

“When God saw his creatures, he commanded them to increase and multiply. Shakespeare, in this first sonnet of the sequence, suggests we have internalized the paradisal command in an aestheticized form: From fairest creatures we desire increase. The sonnet begins, so to speak, in the desire for an Eden where beauty’s rose will never die; but the fall quickly arrives with decease. Unless the young man pities the world, and consents to his own increase, even a successively self-renewing Eden is unavailable”.[1]

Chelsea Piers is a series of piers on the West Side of Manhattan in New York City in the Chelsea neighborhood, on the northern edge of Greenwich Village and the Meatpacking District. They were a passenger ship terminal in the early 1900s that was used by the RMS Lusitania and was the destination of the RMS Titanic. The piers are currently used by the Chelsea Piers Sports & Entertainment Complex. Pier 59 is home to the Chelsea Brewing Company the only micro-brewery in Manhattan. The new complex includes film and television production facilities, including those for CBS Sports Network and Food Network, a health club, a day spa, the city’s largest training center for gymnastics, two basketball courts, playing fields for indoor lacrosse and soccer, batting cages, a rock climbing wall and dance studios. In addition there is an AMF Bowling center, a golf club with multi-story driving range, and two full sized ice rinks for skating. The complex also includes a marina for mooring private boats. 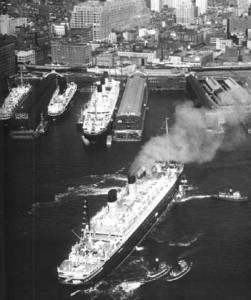 Chelsea Piers is part of Hudson River Park, a waterside park on the Hudson River in the New York City borough of Manhattan. Bicycle and pedestrian paths, span the park north to south, opening up the waterfront for recreational use. It is a joint New York State and New York City collaboration and is a 550-acre park, the biggest in Manhattan after Central Park. The park arose as part of the West Side Highway replacement project in the wake of the abandoned Westway plan.

History
Historically, the term Chelsea Piers referred to the luxury liner berths on Manhattan’s west side from 1910 to the 1930s. Most of the major trans-Atlantic liners of the day docked at the piers. With luxury liners becoming bigger and bigger, New York City was looking for a new luxury liner dock in the early 1900s. The Army, which controlled the location and size of piers, refused to let any piers extend beyond the existing pierhead line of the North River (the navigation name for the Hudson River south of 30th Street). Ship lines were reluctant to build north of 23rd Street because infrastructure was already in place, including the High Line Rail line and a train station near the river at 23rd Street.[2]

New York City solved the problem in an unusual way — it actually took away a block of land that was once part of Manhattan. The land was the 1837 landfill that extended Manhattan to 13th Avenue. The controversial decision included condemning many businesses. The new piers were designed by the architectural firm of Warren and Wetmore, which has also designed Grand Central Terminal. Under contracts let by the New York City Department of Dock and Ferries, the Chelsea Section Improvement, as it was officially called, replaced a hodgepodge of run-down waterfront structures with a row of grand buildings embellished with pink granite facades and formed the docking points for the rival Cunard Line and White Star Line.

After New York moved its luxury liner piers to the New York Cruise Terminal between West 46th and West 54th Street in 1935 to accommodate bigger ships such as the RMS Queen Mary and the SS Normandie, the pier became a cargo terminal. During World War II the piers were used to deploy troops. [1]

In July 1936, the Chelsea Piers were the point of departure for Jesse Owens and the United States Olympic team as they left for the Summer Games in Berlin, Germany.

The piers had a catastrophic fire in 1947 that destroyed some of the south piers. New construction resulted in new cargo piers used by the United States Lines and Grace line.

In the 1980s, plans circulated to replace the West Side Elevated Highway with an at grade highway going along the West Side south of 42nd Street. The plan called for the highway to run over demolished piers. Pier 54 was actually demolished in 1991 although the archway entrance (along with the White Star and Cunard signage) was retained. The plan (dubbed the Westway) was abandoned after court cases said the new highway would jeopardize striped bass.

Lusitania and Titanic Disasters
While every trans-Atlantic ship of the era visited the piers, the two most memorable moments for the pier were with the Lusitania and Titanic. The RMS Lusitania left her Cunard Pier 54 before being torpedoed and becoming the rallying cry for American involvement in World War I. The RMS Titanic was destined for the White Star pier 59 when she sank. Survivors were rescued on Cunard’s RMS Carpathia. The Carpathia dropped off the Titanic’s lifeboats at Pier 59 before going back south to Pier 54 where she unloaded the passengers and survivors. Thousands of people assembled at the dock to greet the ship.

Sonnet Project
Chelsea Piers was the featured location for Sonnet 1, performed by Artistic Director Ross Williams, directed by Melinda Hall. The video was released on April 26, 2013.

Ross Williams cut his teeth in the world of theater when he played a ferret and the rear end of a horse in The Wind in the Willows at the local community theater, Fantasy Playhouse in Huntsville, Alabama where he grew up. At Grissom HS he acted in, and directed many shows under the tutelage of Gail Rodenhauser and Sandra Hayes. His directorial debut was a one-act version of The Importance of Being Earnest by Oscar Wilde which, while it likely lacked the acerbic edge that only a jaded sense of irony can bring about, was well-received by those audiences that were lucky enough to score tickets and find themselves in that darkened, institutional auditorium.

Following high school Ross attended Southern Methodist University in Dallas where he studied Acting and Directing. He then went on to get an MFA in performance at the Cleveland Play House Graduate Actor Training Program through Case Western Reserve University. While at Case, Ross discovered his great love of Shakespeare.

Since moving to NYC, Ross has acted, directed and taught with many of the small Shakespearean companies in the city. His most notable performing gig took him to Toronto, Ontario where he originated the role of Gimli the battle-axe wielding dwarf in the world premiere of The Lord of the Rings musical extravaganza directed by Matthew Warchus.

Melinda Hall (Willful Pictures) is a writer, director, producer and actor for both stage and film. She produces the Annual Shakespeare’s Birthday Sonnet Slam which takes place at the Bandshell in Central Park. It’s a free event where all 154 Sonnets are read aloud by 154 people of all ages.

For the Shakespeare Week at the New York Public Library 2013, Ms. Hall was honored to give a talk on the style of Directing for Shakespeare for the stage.

Recently, she directed Sonnet #1 for the New York Shakespeare Exchange’s Sonnet Project which was shot on location at the Hudson River Park, NYC and features Ross Williams.