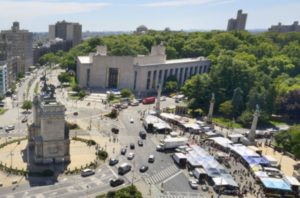 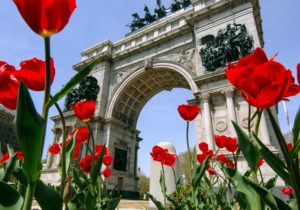 From you have I been absent in the spring,
When proud pied April, dressed in all his trim,
Hath put a spirit of youth in every thing,
That heavy Saturn laughed and leapt with him.
Yet nor the lays of birds, nor the sweet smell
Of different flowers in odour and in hue,
Could make me any summer’s story tell,
Or from their proud lap pluck them where they grew:
Nor did I wonder at the lily’s white,
Nor praise the deep vermilion in the rose;
They were but sweet, but figures of delight,
Drawn after you, you pattern of all those.

Yet seemed it winter still, and you away,
As with your shadow I with these did play.

Analysis
One of the sonnets addressed to the ‘Fair Youth’, this poem sees Shakespeare bemoaning the fact that he could not appreciate all the beauty of spring around him because he was absent from the young man. As a consequence, spring seemed like a winter to him. April may have ‘put a spirit of youth in every thing’ – the word ‘youth’ reminding us, perhaps, that Shakespeare is addressing a ‘fair youth’ whose spirit he much admires – but for the Bard, it might as well be winter because he cannot take delight in the flowers or the birdsong (‘lays of birds’).

Even ‘heavy Saturn’ – the planet whence we derive the adjective ‘saturnine’, denoting heavy and sullen sluggishness – is cavorting about with the springtime, but Shakespeare is unable to join in. The beauty of spring is all round – the remarkable whiteness of the lily, the fiery red (‘vermilion’) of the red, red rose – but Shakespeare notices none of it. Such beautiful symbols of springtime are only copying the beauty of the Fair Youth – who is absent from the poet, and so the cause of his unhappiness because they are apart.[1]

History
Grand Army Plaza is a public plaza at the northern corner Prospect Park in Brooklyn. Designed in 1867 by Frederick Law Olmsted and Calvert Vaux, and originally neameed Prospect Park Plaza, it is home to the visually arresting Soldiers’ and Sailors’ Arch, as well as a number of other monuments, including the Bailey Fountain, the John F. Kennedy Monument, and statues of Civil War generals Gouverneur K. Warren and Henry Warner Slocum.

In 1926, the plaza was renamed Grand Army Plaza to commemorate the sixtieth anniversary of the foundation of the Grand Army of the Republic, a fraternal organization composed of veterans of the Union Army and other military services who served in the American Civil War.

In 2008, a competition was held for designs to reorganize Grand Army Plaza to make it a more integral part of Prospect Park and more accessible to pedestrians.[13] At the same time, the New York City Department of Transportation (NYCDOT) made improvements in accessibility, putting sidewalks and planters in many of the striped areas. These improvements made it somewhat easier and safer for pedestrians and cyclists to cross from the park to the library and to the plaza. The changes made by the NYCDOT were modest in comparison to those in the designs in the competition, most of which called for the rerouting of some of the vast traffic flow.

Sonnet Project
Grand Army Plaza was the featured location for Sonnet 98, performed by Ignacio Velez, directed by Harry Taylor. The video was released on August 14, 2018.

Ignacio Velez
Ignacio Velez learned he loved the art of performing while faking sick from school to watch reruns of Bewitched and I Love Lucy. Working with local performance companies such as Mystic Vision Players, Feenix Films,  And Machoola Productions, his favorite roles include Billy Bibbit in One Flew Over the Cuckoos Nest, Charlie Brown in You’re A Good Man, Charlie Brown, and playing twelve different characters in The Laramie Project. He’s honored to be able to add the Sonnet Project  to his body of work.

Harry Taylor
Harry Maxwell Taylor JR born in Houston, Texas. Raised in New Jersey/ New York most of his life. Harry went to study film at Full Sail University in Orlando, Florida for 2 years. He graduated with a Bachelors for Cinematography. After graduating he moved back to the Tri-State area, learning more of the post production life as an intern and is now a freelancer. Taking jobs like Camera Operator, PA, and even Director.