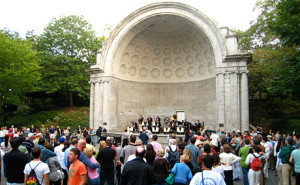 Music to hear, why hear’st thou music sadly?
Sweets with sweets war not, joy delights in joy.
Why lovest thou that which thou receivest not gladly,
Or else receivest with pleasure thine annoy?
If the true concord of well-tuned sounds,
By unions married, do offend thine ear,
They do but sweetly chide thee, who confounds
In singleness the parts that thou shouldst bear.
Mark how one string, sweet husband to another,
Strikes each in each by mutual ordering,
Resembling sire and child and happy mother
Who all in one, one pleasing note do sing:
Whose speechless song, being many, seeming one,
Sings this to thee: ‘thou single wilt prove none.

Analysis
Sonnet 8 is another procreation sonnet urging the young man to whom it is addressed to marry and have children. A comparison is made between the harmony of different instruments in an orchestra, voices in unison, and a harmonious relationship between a family.

A lesson is drawn from the young man’s apparent sadness listening to music. Music itself is concord and harmony, similar to that the happy household of father, child and mother, as if they were separate strings in music which reverberate mutually. Will compares the harmony of different instruments in an orchestra, voices in unison (although on “one note” an octave apart) and a harmonious relationship between a family. The music, which he hears, angers him as it makes him feel worthless living a single life. He will become nothing having not had children.

Will’s Wordplay
“concord” and “unions married” here mean musical harmony, but their application to romantic relationships is not lost on the Bard.
“thou single wilt prove none” is an allusion to the common saying “one is no number”, and also tells the youth he will amount to nothing.

Scholar’s Corner
As Blick points out, this sonnet, which in its numbering invokes the union or unison of the octave, is associated with sonnet 128 by the vocative naming of the addressee as “music”, but in sonnet 128 harmony in unions/unison is to be achieved by the “kiss”, not marriage. Here, it is the young man’s singleness that prevents a unison. [1]

History
“Next time you walk past the Naumburg Bandshell on the concert ground, you might hear a musician playing today’s hits. But in 1862 when a cast-iron bandstand was erected on the spot on which the Beethoven statue stands today, the very straight-laced commissioners would not have approved of popular music. They wanted the public to hear only refined, classical music like that of Beethoven himself.

By the 1890s, marches by John Philip Sousa, choral and folk music were added to the repertoire — but it took until the 1920s for park-goers to enjoy what we know today as popular music. Such greats as Irving Berlin, Benny Goodman and Duke Ellington entertained at the Bandshell, as well as Victor Herbert, whose statue is just a few steps away from Beethoven. Those two statues, as well as the other 49 statues in the Park, are given a cleaning every summer by the Central Park Conservancy.

The Conservancy is also responsible for recreating those beautiful and unique wooden benches surrounding the trees. When the Park was first opened in the 1860s, the elms were newly planted and their roots were still quite shallow. On sunny concert days, thousands of park-goers would jam into the small area and huddle under the fragile trees for shade. Park designers Frederick Law Olmsted and Calvert Vaux were concerned about the survival of the young trees, so they designed these benches to also act as fences, protecting both the elms as well as the Sunday-best clothes that people always wore to come to Central Park.”[1]

Sonnet Project
The Naumburg Bandshell was the featured location for Sonnet 8, performed by Michelle Beck, directed by Emily Ernst and Daniel Burity. The video was released on May 15, 2013

Michelle Beck began her career as an actor at the Oregon Shakespeare Festival in The Winter’s Tale and Cyrano de Bergerac. She appeared in the film Spinning into Butter, followed by Ophelia in Hamlet at the Shakespeare Theatre, directed by Michael Kahn. Michelle went on to work with the director Daniel Fish as Marianne in his Tartuffe at the McCarter Theater and Yale Repertory Theater and in 2008, Beck appeared as Viola in the Chicago Shakespeare Theater production of Twelfth Night, and was then cast in The Bridge Project under the direction of Sam Mendes. Other recent Shakespeare includes: Much Ado About Nothing at Theatre for a New Audience, and Richard III and Love’s Labor’s Lost at The Public Theater. Upcoming: A Kid Like Jake at Lincoln Center. BFA Acting, Suny Purchase.

EMILY ERNST – Co-Director
Emily Ernst was born in Lincoln, Nebraska where she trained as a classical pianist for eleven years. In 2008, she earned a BFA in Acting from SMU (Greer Garson Award) and began her career as an actor doing rep theatre in Michigan. After a summer working with installation artists, acrobats and directors at Friches Théâtre Urbain in Paris, she discovered an interest in directing and education. In 2009, she taught Shakespeare at the Manhattan Country School, and traveled to Hartford to develop curriculum, assistant direct, and lead post-show discussions for an adaptation of Warriors Don’t Cry (Bushnell Theatre). In 2011, Emily directed her first play in Baltimore and assisted Kara-Lynn Vaeni on the Russian opera, Eugene Onegin (Opera Slavica). She returned the following year to assist again on the main stage while also staging the company’s scenes program, featuring scenes in Czech and Russian from four separate operas. She now works full time at an Off-Broadway Shakespeare Company, Theatre for a New Audience, where she coordinates the intern program and in 2012, assisted Arin Arbus on The Taming of the Shrew.

DANIEL BURITY – Co-Director
Daniel Burity is an award-winning Brazilian filmmaker from Salvador, Bahia. He graduated with a degree in Communications from Hélio Rocha College and studied Digital Cinema at the School of Visual Arts, in New York. Daniel began his career working in television at age 22, where he directed, wrote and edited cultural programming. Since 2007, he has worked as a director, editor, producer, and videographer based in New York City. His series, Apple Sounds, about independent musicians in New York City, won the Press Award in For Lauderdale, Florida, and was praised highly by director Michel Gondry. Daniel is also known for his work in music videos, and as editor of the feature documentary Bel Borba Aqui, which played in cinemas across the United States.